Please join us for the Grand Opening of our campaign headquarters! This will be an exciting opportunity to hear from Chris, meet other supporters, and learn how, together, we can move Humboldt County forward.

Please RSVP to Mitra at mitra@votechriskerrigan.com or by calling 707-273-6927

We hope see you there!

by Micheal Reich and Ken Jacobs

“In the face of congressional inaction, the debate on raising the minimum wage is moving to the local level. As more cities and counties consider setting their own wage standards, they can learn from the policy experiments already underway.

Since the mid-1980s, states in every region of the country have raised the local minimum wage, often numerous times. Twenty-one states (and Washington, D.C.) currently have wage floors above the federal level ($7.25), and 11 of these raise them every year to account for inflation. Washington State currently has the highest, at $9.32; California’s is set to increase to $10 on July 1, 2016.

More than 120 cities and counties have adopted living wage laws that set pay standards, many of them in the $12 to $15 range. These higher standards usually apply only to employees of city service contractors, like security guards, landscapers and janitors. In some cities, living wage laws cover workers at publicly owned airports or stadiums, as well as at shopping malls subsidized by local development funds. While the impact on the individual workers covered under these laws is often quite significant, their reach is rarely broad enough to affect the local low-wage labor market as a whole.”

California renters must earn more than triple the minimum wage to afford a two-bedroom apartment, underscoring a housing shortage throughout the state, a new report said.

A worker earning the minimum wage — $8 per hour in California — would have to toil away for 130 hours a week to afford a two-bedroom, the National Low Income Housing Coalition said Monday.

“California is short one million affordable homes for working families,” he said in a statement.

Many low income workers need family members to pitch in to absorb high rents. A California family needs 3.3 full-time minimum wage earners to afford a two-bedroom, the coalition said in its annual Out of Reach report. 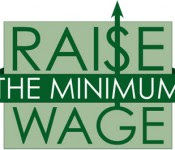 It’s been a year since San Jose voters overwhelmingly decided to raise the City’s minimum wage to $10 an hour, and guess what?  Not only has the sky NOT fallen, as critics warned, but the economy and low wage workers are better off than they were a year ago.

Some of the major supporters of Measure D, as it was called on the ballot, gathered recently to observe the one year anniversary of the measure’s implementation that raised the wage by $2 in one fell swoop. The measure had the support of the San Jose State students who came up with the idea and worked hard to pass the measure; the South Bay Labor Council ran the field campaign to get voters to the polls, and major community service organizations like Working Partnerships USA, United Way Silicon Valley and Sacred Heart Community Services supported it.  Overall data from the last year backs up the initial belief that passing the increase was the right thing to do.

the rest of this worthy article: